Limited crime and maximum safety are fundamental to the growth and survival of any neighborhood or city. In the neighborhood of Homewood-Brushton, the media has historically portrayed the area as a hostile and crime-ridden environment. The purpose of our research and analysis is to determine which threats are most pervasive to the neighborhood, and we will offer means of combating the crimes that arise frequently within the Homewood-Brushton area.

Our group analyzed the data provided by the Southwestern Pennsylvania Community Profiles to determine the types of crimes that are most prevalent within the neighborhood. Unsurprisingly, Part II crimes have been the highest over the years, as this type of crime encompasses many non-violent crimes. The FBI defines Part II crimes as robbery, assaut, larceny, fraud, embezzlement, drug abuse, driving under the influence, drunkenness, and disobeying liquor laws.

The area of Homewood West, which encompasses streets such as Amity Way, N Murtland Street, and Gerritt Street, demonstrated the lowest count of crime incidences in the years of 2010-2013. The counts took into consideration all types of crime, such as violent crime, gun crime, part II crime, and property crime.

Overall, the total count of crimes in Homewood-Brushton has been strikingly high. As evidenced in the graph above, there is an upward trend of crime prevalence in the neighborhood over the past few years.

In order to best determine the greatest threat to Homewood-Brushton in relation to crime, our group broke down and scrutinized the most prevalent type of crime, part II crime, into its many factors. 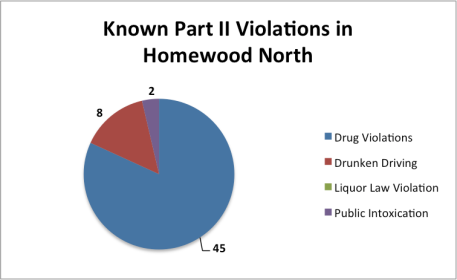 The graph above is a reflection of the data provided by the City of Pittsburgh Department of Public Safety. In Homewood North in 2014, drug violations were found to be the most prevalent type of part II crime. There were no known liquor law violations within the area. 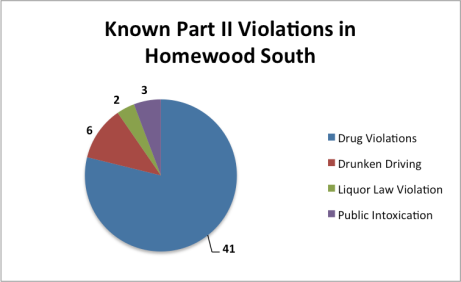 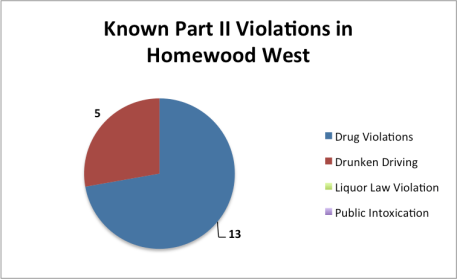 Homewood West, which has previously shown to have the lowest level of crime rates, again demonstrated low levels of part II crime incidence. However, drug violations were proven to be the highest type of crime present within the area.

Since the largest percentage of crime in Homewood stems from drug related offenses, it remains very important to analyze how these offenses are being handled. Often times, they are being treated as criminal issues rather than medical ones. This leads to an increasing number of incarcerations for these crimes. Then upon returning to society after the end of their sentence, there is a large rate of recidivism and repeat offenses because the original problem at hand was never treated. This is a problem not only in Homewood, but all over the country.

The United States of America, the “free” country, is jailing at incredible rates that are disproportionate to the actual demographics of the population. There proves to be an increasing number of individuals serving time for nonviolent offenses. Take a look at where the US stands in relation to other countries on mass incarceration.

Based off the break down of crimes being committed in Homewood as well as the demographics of the area, we can assume that the majority of incarcerations are from nonviolent offenses and are contributing to the misrepresentation of Blacks in prison.

Only one of the main goals of prison is being accomplished. Deterrence and Rehabilitation are not occurring as we can see by the recidivism rates, and incapacitation is not being carried out correctly if those being removed from society never were a threat to society in the first place. The only things prisons are good at are punishing and taking away freedom.

The prison abolition movement attempts to eliminate prisons and the prison system. It views prisons as an ineffective way of decreasing crime and reforming criminals. They also agree that the current criminal justice system is racist, sexist, and classist. One of the many arguments made for prison abolition is that the majority of people accused of crime cannot afford to pay a lawyer.  This movement proposes a variety of alternatives to prisons as well as provide social, economic, and safety benefits. You can find more information about these movements here in addition to many resources on how to get there:

In addition to this, the amount of money going into funding, maintaining, and constructing prisons that are largely overpopulated is growing more than 100% faster than money going into education. If the prisons did not dominate so much money then there would be more money available to fund things like education. There could potentially be money available to revitalize communities like Homewood-Bruston.

Along with decriminalizing drug offenses, it is also important to decriminalize the ways in which we treat drug addiction and drug abuse. It remains easy to use a criminal justice template in order to solve these issues; however, this does more damage than it does good. Victor Rios describes a phenomena where the combination of these criminalizing influences cause conformation to being criminal as well as lowers self-esteem which can also lead to more crime.

The most effective way to combat high rates of drug abuse is through education. It’s important for people to understand what they are putting into their bodies and how it is affecting themselves and those around them. We chose to focus on alcohol, marijuana, and heroin due to their prevalence of offenses in Homewood crime records. Below is quick information about each substance, how it affects the body, fines associated with their possession, and resources for those struggling with substance abuse. 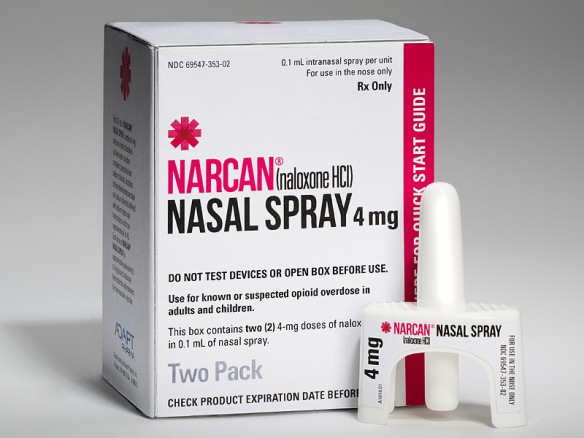 Throughout our research, we have discovered that crime continues to steadily increase throughout almost all areas of Homewood; however despite popular belief, violent offenses are not the most prevalent in the area. Although commonly believed to be a very dangerous area, drug use is a much larger problem on the entire scheme of things. With the breakdown of offenses in Homewood, Part II crimes proved to greatly outnumber any other offense in the area. We have discussed the many signs and effects of drug use, abuse, and overdose that could serve as a supplement to anyone unsure about a family member or friend to potentially implement early intervention.

Homewood possesses many treatment facilities within the community; however, none of these facilities offer in patient care, which is often the best form of treatment when it comes to addiction. There are many available vacant lots in the community that new treatment centers could be constructed. This would also offer the opportunity for more employment for current residents in Homewood. In addition, we suggest an overall decriminalization of drugs including also decriminalizing the ways in which we treat drug use issues.

Homewood remains an area with great people and a community with enormous potential. There simply needs to be action taken in the right areas. If crime rates are lowered and safety is increased in Homewood-Brushton, the neighborhood would be setting itself up for maximum growth and revitalization.