This study aims to investigate the current political landscape of Homewood-Brushton, specifically in terms of voter turnouts for their local and state representatives and the legislative agendas of the candidates who won in the most recent election. Our study consists of an analysis of various social media and other websites. We focused our research on two elected officials in particular, Councilman Reverend Ricky Burgess of District 9 and State Representative Ed Gainey of District 24 because of their close connection to the neighborhood of Homewood and the surrounding area. Through condensation and analyzation of our research, we will provide a comprehensive summary of Councilman Burgess’ and Representative Gainey’s political agendas. Through this summary, we will attempt to spark community discourse and inform the voting population about their representatives.

District 9 is part of the city of Pittsburgh and consists of the neighborhoods of Garfield, East Liberty, Larimer, Homewood, Point Breeze, Friendship, Lincoln-Lemington-Belmar, and the East Hills. The population of the district is 33,730 people.

Map outline of the neighborhoods that are part of District 9.

District 24 is a legislative region located within Allegheny county. A majority of District 9 resides within the 24th district, with the exception of parts of Point Breeze. It also includes the neighborhoods of Highland Park and Shadyside, as well as parts of Wilkinsburg. The population of the district is 60,119 people.

Map outline of the region of Allegheny county that District 24 covers.

Voting information for past elections:

The number people who voted in the primary elections for either candidates was quite low compared to the number of total people living in the area. the increase in the number of voters in the general election in 2012 for Ed Gainey can probably be attributed to the fact that it was also the year of a presidential election.

Reverend Ricky Burgess has been city councilman for District 9 since 2007. He has won every election with a majority of the votes (2007/2011/2015). He recently ran for re-election in 2015 as the incumbent candidate and was up against Andre Young, Judith K. Ginyard, and Twanda D. Carlisle, who was the city councilman before Burgess, in the primaries. He has run unopposed in the general election except for 2007. The next time Burgess will be up for re-election is November 2019.

Edward (Ed) Gainey has been the state representative for District 24 in the last two election cycles (2012/2014) and won with a majority of the votes both times. He is currently up for re-election this year (2016), and is running against William Anderson and Todd Koger. Both candidates also ran against him in 2014. In the past two election cycles, Gainey has run unopposed in the general election. 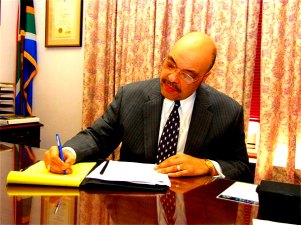 Ricky Burgess primarily uses Facebook and Twitter to keep his followers up to date about his legislative activities and current events, but he is not especially active. He seems to use Facebook more than Twitter, however, he was also unable to be contacted via Facebook, indicating that it more of a news outlet for Burgess than a means of communications. Burgess’s social media pages can be used to gain information about his legislative agenda and current plans.

Ed Gainey’s social media presence consists primarily of Facebook, Twitter, and Instagram. He seems to be active on all outlets, however, we were unable to contact him via Facebook. He uses Facebook and Twitter to inform the public about legislation that he is passionate about, as well as current events. He uses Instagram to document his interactions with community members and other politicians. Gainey has a strong social media presence, which allows him to inform the community about what is going on. His social media pages are good ways to find out what community activities that he is involved in.

The candidates prided themselves on their connectedness to the communities they represent and their awareness of the issues their constituents needed resolved. Upon analysis, both individuals had moderate but disconnected social media presences, using it as a method of updating voters on their actions but not as an avenue of communication. Gainey seemed to be more active than Burgess, though, with more frequent updates and less time between each update. Each candidate chose a handful of issues they wanted to tackle, and have made efforts towards implementing change. However, small voter turnouts and lack of feedback on how policies affected residents do not allow us to draw a concrete solution on if these efforts have been successful.

In the “Homewood Urban Agenda Strategy” released by the Community Empowerment Association, political empowerment is described as “the ability to influence and shape the environment into rational policies that will impact our own lives.” Political engagement is key to enacting larger scale changes that may not be feasible at the community level alone.

The first step is to increase citizens’ awareness of the issues that their community faces, as well as who their elected officials are. There are times that information may not be readily available or easily accessible for everyone, so it is important to provide more avenues of contact and news. Being well-informed and confident about who they can turn to for help, people are more actively involved.

Voter turnout, particularly for local elections, has always been relatively low, but there are also ways to mobilize the community. Establishing a voting bloc, which is a group of voters united by a common concern or goal, can encourage people to join in and increase voter turnout when election day comes around.