What are Health Disparities?

Health disparities are the differences that result in one’s health based off of factors such as race, ethnicity, socioeconomic status, or education. These differences would be preventable if social, political, and economic resources were distributed equally throughout society. Health disparities result from the inequalities in access to health care, which leads certain groups of people to be more susceptible to infectious diseases and chronic diseases. The groups most likely to suffer from health disparities in our society are African Americans, Latino/as, and those of low socioeconomic status.

The main focus of the observational and data-based research being done was to determine the structural factors that influence the health outcomes in the Homewood-Brushton area. From the information gathered via public databases, the study was directed to the overall health of the environment and the infrastructure that occupies the neighborhood, the situation surrounding the Homewood “food desert”, and lastly the rehabilitation centers and their general accessibility.

Urban populations of low socioeconomic status face a multitude of obstacles towards progress that all function in a cyclical manner leading to worse and worse outcomes. Untreated sickness leads to a rise in missed days of work, decreased productivity at work, bleak behavioral affect and others that do not help the circumstances of the urban population. This page aims to characterize the disparity between what the community needs and what it is getting and further propose solutions that residents may see fit for their community.

The environment, including the air we breathe, the water we drink, and the outdoor spaces our children play in, can all have an impact on the health of ourselves and our children. If the environment is unsafe, this can have significant long-term, negative effects on health.

Children in Homewood-Brushton have been found to suffer from increased levels of asthma relative to children living in other neighborhoods. Asthma is a complex condition that can have many contributory causes. Poor indoor air quality, found in aging homes like many in Homewood-Brushton may trigger asthma attacks. Additionally, Homewood-Brushton has been found to have elevated levels of NO2, ranging from 11.9-16.7 ppb, compared to the national average of 9.0 ppb. Asthma may also be induced or worsened by conditions of stress, such as financial hardship, food insecurity, and gun violence.

Recently, the dangers of lead in urban environments has been brought to national attention by the water crisis in Flint, Michigan. Lead can accumulate in the body over time, where it becomes distributed to the brain, liver, kidney and bones, and can cause significant disability, particularly in children, whose bodies are still developing. The WHO estimates that lead poisoning contributes to about 600,000 cases of children developing intellectual disabilities each year. Long term exposure in adults can contribute to high blood pressure and kidney disease, and in pregnant women, can cause miscarriage and low birth weight.

In the United States, the natural level of lead found in the soil is around 30 mg/kg. We sampled three sites in Homewood-Brushton: near Westinghouse Academy, the Homewood-Brushton YMCA, and Homewood House Senior Center. The soil from the YMCA had 319.40 mg/kg of lead, and the Homewood House Senior Center soil had 295.94 mg/kg. Both of these sites had around 10 times more lead than natural. The soil sample from the Westinghouse Academy site, however, had 2509.58 mg/kg of lead, representing levels nearly 85 times higher than should exist naturally. Not only does this represent a significant threat to the health of children from the neighborhood or nearby schools who may play in the grass on that lot, but high levels of lead in soil have the potential to leak into water pipes. This is especially the case in Pittsburgh, where the aging infrastructure of the water systems is of concern. For more on this topic, visit the page on Environment/Land Use.

In order to address the effects of the environment in Homewood-Brushton, resources must be directed toward improvement of infrastructure systems, including the water and sewage systems, and neglected sidewalks. There should be a thorough evaluation of the presence of lead in old homes, the soil, and the water, and the creation of an action plan for cleanup.

Obesity is more prevalent among groups of low socioeconomic class and obesity also disproportionately affects the African American and Hispanic/Latino/a populations. It has been found that those who live in poverty are at a greater risk of experiencing poor health. The population of Homewood-Brushton is 94.2% African American and the average familial income is nearly half of the average income for the city of Pittsburgh. The African American population in the United States is more prone to developing type II diabetes and cardiovascular disease, both of which can be caused by obesity. 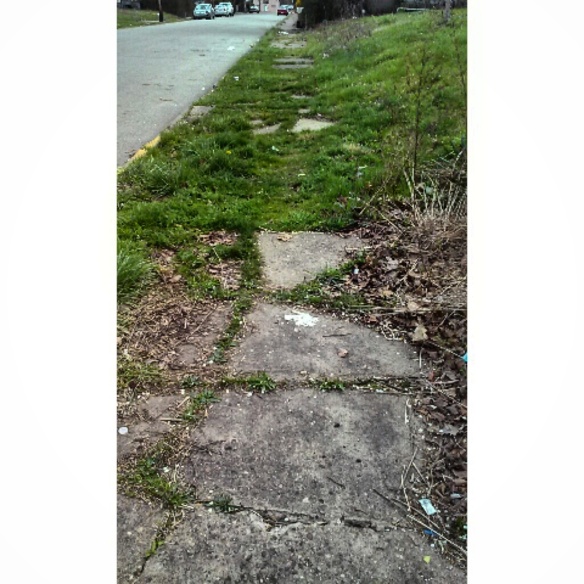 A sidewalk that is not conducive to exercise

In order to improve the quality of life for the residents of Homewood-Brushton, local government must obtain sufficient funds. These funds should go toward improving sidewalks and building parks in vacant lots and building at least one grocery store in the neighborhood. If sidewalks are safe for pedestrians, they will walk and they will exercise and access to healthy food means that more residents will have the opportunity to eat healthily.

To understand the lack of access to healthy, full stop grocery stores in Homewood, let’s take a look at a map from 2015 compiled by the Pittsburgh Post Gazette. The area enclosed by the oval are Homewood North, West and South that together constitute Homewood. Within this area there’s a Salvation Army Food Pantry, William Baker’s Dairy and Perry’s Honeydripper, a small grocer. The food pantry can only provide a limited volume and variety of foods for the 6,500 residents. In an interview with the Pittsburgh Post Gazette, William Baker said “if they need two or three items, they come here, but if its more, they still have to go somewhere else.” He also commented that his store is too limited to provide what everyone needs. Lastly, the Perry’s Honeydripper is a small grocery store that also provides hot breakfast and dinner. In owner James Perry’s words “ we’re here for the mother who needs one green pepper to finish making dinner.” The demand for produce in the neighborhood gives Mr. Perry the desire to one day build a complete grocery store that can meet the retail needs of the community while also creating jobs.

Supermarkets outside of Homewood pose issues in access because residents rely on public transit, which does not facilitate the transport of bulk groceries. Walking around the community reveals closed down and boarded up retail grocers that the residents are in dire need of. This leaves residents of the food desert to succumb to easy and accordingly unhealthy options as the main form of sustenance. 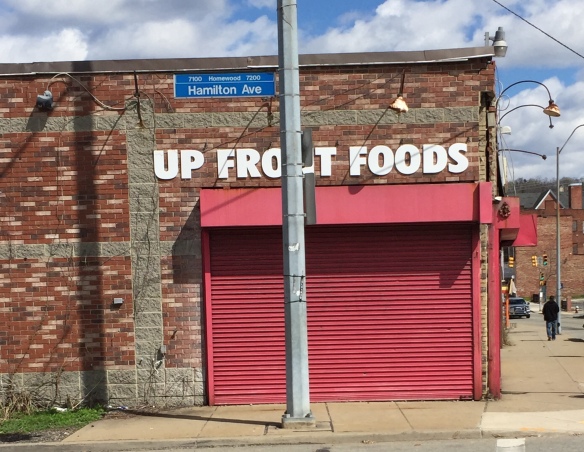 There are a few options that food deserts across the country have begun to adopt in order to equip their residents with nutritious, affordable food sources and education on eating healthy.

Potential solutions for the dietary issues that face Homewood have a short term and long term component. Some short term steps towards alleviating the difference in what’s needed and what’s supplied are farmers markets and urban agriculture. Farmers markets would allow residents to pay directly what the farmers needs to meet their profit margins without the added costs of retail franchises. SNAP benefits may be used for these transactions and further bring down costs for fresh, nutritious food. Farmers may also provide information on how to use the produce in ways the community might not have know possible. Urban agriculture is another short term solution that can allow NGOs, residents and the municipality to work together to utilize some of the many vacant lots in innovative ways to provide much needed nutrition to the community without retailers. A long term solution is establishing a food co-operative in the neighborhood. Food co-ops, similar to that established in the East End are run by the people for the people. Production and distribution decisions are voted on by members and thus will be made to keep costs low but also provide sustainability of the retailer. Tested paradigm and policy have been established through practice and so the groundwork has been laid and now comes the execution.

The Homewood-Brushton area exhibits a relatively astounding lack of accessibility to health care and rehabilitation services within the neighborhood itself. Simply googling centers for care provides three options for service: Forbes Center for Rehabilitation & Healthcare, Keystone Physical Therapy, and Allegheny Housing Rehab Corporation. Two of these three options focus primarily on physical therapy, therefore do not prove to be helpful for those in search of mental health and drug rehabilitation options. The number of individuals that required drug and alcohol care has increased by .2% from 2013 to 2014; the number of individuals seeking mental health rehabilitation has remained constant at 9.7% of the population since 2013. With number as high as 319 of a population barely greater than 3,000 individuals, they require more than just one place to turn to for care.

According to the Allegheny County’s Medicaid Mental Health Services data, there is only one organization within the Homewood-Brushton census tract lines that constitutes as an “adequate” treatment facility. The Community Empowerment Association provides outpatient procedures to residents operating underneath the Medicaid bill; they offer a range of services, from diagnosis and treatment to drug/alcohol and social resources. 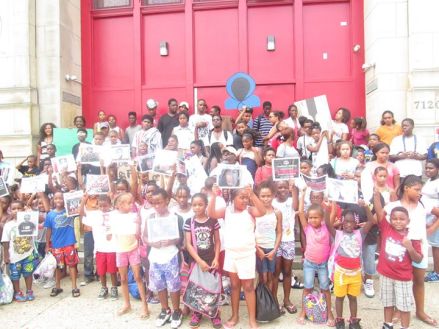 Until significant amounts of money are set aside to create additional rehabilitation centers within the Homewood-Brushton community, there is little that can be done to improve the treatment for those living within the neighborhood. There is such a small population due to other demographic concerns, there would hardly be a patient base to sustain new centers if they were to open anyway. The most realistic solution would be to increase the awareness of the prevalence of mental illness and the options of available to Pittsburgh citizens; in a way, the community could create a safe place, but direct people to facilities in other neighborhoods as necessary.

The Rosedale Block Cluster is a group centered around improving the quality of life the residents of Homewood South.

Instructions on how to start a Food Co-Op

Food Coops across the country

The Community Empowerment Association focuses on addressing the needs of people of all ages within the Homewood-Brushton community.