The School-to-Prison Pipeline is a phenomenon visible throughout our country. In definition, it is the link between students being excluded from educational environments, pushing them into juvenile delinquency and eventually prison (Wilson, 2014). It’s often associated with zero tolerance policies in discipline that encourage severe punishments such as immediate suspension for any form of disturbance. In addition, these policies are formulated to overly target minority children and students with disabilities (Fader et al., 2015).

For a further explanation, watch this video.

The purpose of this page is to examine how this process occurs in Homewood-Brushton, and more specifically, Westinghouse Academy, the main school in the area. In addition, our interrogation of the problem will focus on the antecedents i.e., how the school conduct policy pushes students to delinquency. Using the Pittsburgh Public Code of Conduct (WCC), the Westinghouse Student Handbook (WSH), and the School Safety Report (SSR) as our main sources, we interrogate the negative effects of excessive, extreme descipline and how to move forward in addressing students and proper discipline in schools. 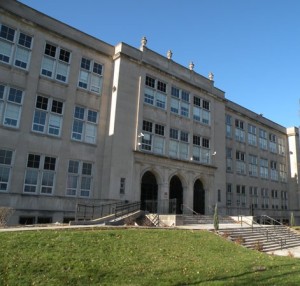 Westinghouse Academy is a grades 6-12 school located in Homewood-Brushton. In the 2014-15 school year, 443 students were enrolled, making up an almost one hundred percent African-American student body (SSR). The school has a strict attendance policy, requiring parental accompaniment for tardiness after 8AM and zero tolerance policies on drugs, alcohol, and weapons (WCC). There is a habitual truancy rate of 12.64%, meaning that these students are absent without excuse for too many days (SSR). In addition, fights, incidents considered assault, bullying, and even disorderly conduct are almost always dealt with through suspension, with out-of-school being the most likely (SSR). While some of these students are then placed in alternative education programs (22 of 130 offenders) in the last school year), most of the offenders are given no aid in continuing their learning while suspended (SSR). Grades 6 through 10 contain the highest rates of offenses, especially out-of-school suspensions (SSR), showing that these grades should be the target area for aid.

Chart 1: All disciplinary data is taken directly from the Safe Schools – School Report of Westinghouse Academy. At the school, Fighting is the most common infraction by students at 41%, followed by Simple Assault on Student at 16% and Bullying at 7%. 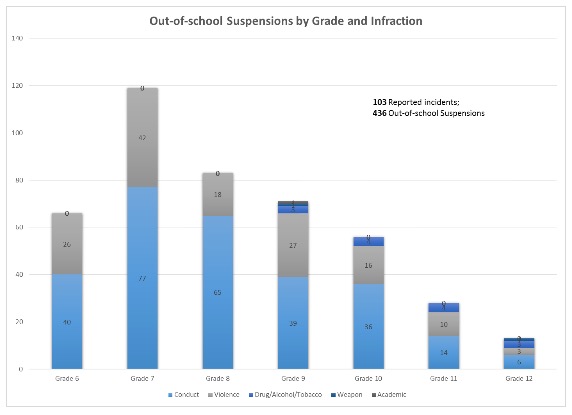 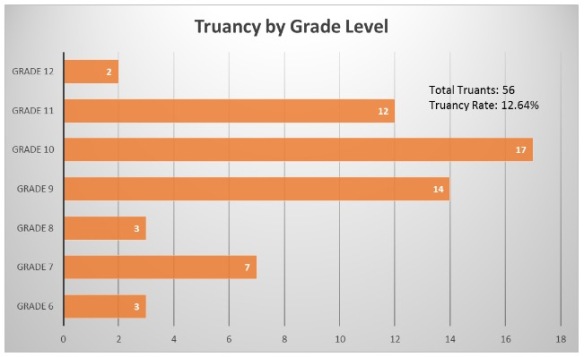 The Pipeline and Westinghouse

How can we see the Pipeline in action in Westinghouse?

In addition, there are few efforts to help those students who are offenders. For example, in the same school year, only 22 students participated in Alternative Education and the same amount in family counciling. No students were assigned to anger management courses, guidance counseling, etc. (SSR)–the programs that could help students to not get in trouble for the same reasons in the future. 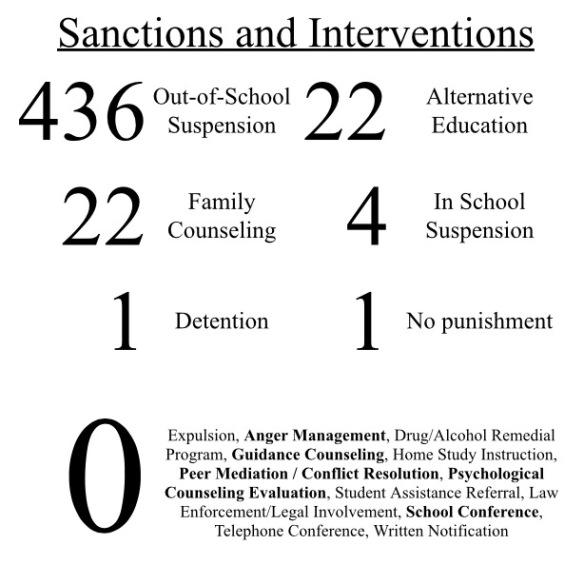 Figure 1: When an infraction is identified, there is a 90% chance that the student will receive an out-of-school suspension (Figure 1). The Report lists other sanctions available for utilization: anger management, guidance counseling, peer mediation/conflict resolution, and psychological counseling evaluation (Figure 1). These interventions are positive approaches to discipline, perhaps lessening the chances of the offender repeated their negative behavior in the future. However, these interventions were not utilized by Westinghouse administrators whatsoever. In choosing out-of school suspension over more productive and positive sanctions, it seems that administrators wish to punish students instead of reforming them, which is not in alignment with the Pittsburgh Public School’s value of “progressive” sanctions for infractions.

How can this be helped?

In focusing on possible solutions, the primary suggestion would be for the utilization of other sanctions against student misconduct. While suspensions should still be used, their use should only be for severe violations of conduct and used sparingly. Furthermore, when suspension occurs, students should still be able to do their assignments in any case, instead of negating all work during that time if they fail to attend alternative education (WSH). Similarly, with the high rate of unexcuse do absences given, students should still have their work that is completed during that time count for a grade. Education is key to having young people succeed in life, so keeping students in a learning environment is vital. Even if students are given detentions or suspensions, they should either be after school, or the students should be able to get their work from class. Removing children from learning and not giving them other options is exacerbating the problem.

On a similar topic, there need to be further options for interventions, or if the options exist in the school, there needs to be greater utilization. Programs like conflict resolution and anger management training can help to prevent future fights and assaults from happening, while guidance and psychological counseling can help students with internal issues. In addition, other academic achievement programs can help students to stay on track even when they are out of the classroom. As Grades 6 through 10 are both the problematic and vital to graduating grades (Balfanz, 2013), particular attention needs to be paid by the district to students in those years.

“We will send all eligible urban youth to college or trade school with a scholarship. We promote the reform of urban schools so that our young people are prepared for successful and meaningful lives.”

The Pittsburgh Promise is a program designed to help send students in Pittsburgh Public Schools to college or trade school through an academic scholarship. To qualify, students have to fulfill a variety of requirements, but the most visible ones are maintaining a 2.5 GPA in high school and a 90% attendance rate (with unexcuse absences and out-of school suspensions factoring into this rate). This information and more can be found on the Pittsburgh Promise website.

This program would appear to benefit many children in the Homewood-Brushton area, but when looking at the data, many Westinghouse students are unable to participate. There were 436 cases of out-of-school suspensions in the 2014-2015 year (SSR), and in 2013-2014, 58% of students attended school less than 90% of the time (Pittsburgh Public Schools), which automatically disqualifes them from the program. Westinghouse’s tendency to encourage absenteeism through strict tardiness policies and to use out-of-school suspension as a fix-all solution both contribute to these rates. As such, Westinghouse’s policies can be interpreted as to actively work against students’ potential for higher education and success.

-“A Promising Approach to Narrowing the School-to-Prison Pipeline,” Balfanz (2013)

More information on and experiences with the School-to-Prison Pipeline:

-Restorative Justice and the Pipeline in California

-The Pipeline in action at UPrep Pittsburgh Millones