“Our lives begin to end the day we become silent about the things that matter.”

What is Environmental Justice?

The Environmental Justice movement holds its roots close to the Civil Rights movement and seeks to promote and establish environmental health and equity as a basic human right regardless of one’s race, color, ethnicity, or income.

Environmental benefits and burdens aren’t always fairly distributed among societies and historically racial minorities and the poor have been disproportionately subjected to industrial pollution, waste sites, and other toxic materials which undermine the health and well-being of a community.

The Environmental justice movement seeks to expose potential sources of environmental inequality and racism, and by doing so, encourage communities to take part in fighting for social change to establish environmental equity and well-being. Our environment is the foundation of our community and its health is vital to our own.

Homewood-Brushton is a neighborhood on the North-Eastern border of Pittsburgh, PA. The community’s rich history begins when it was settled by Pittsburgh’s tycoons including Henry Clay Frick, John Heinz, George Westinghouse and Andrew Carnegie who sought “the country life” over the hustle and bustle of an increasingly polluted Pittsburgh.

As Pittsburgh grew on the back its booming steel industry, so too did Homewood-Brushton and by 1910 became one of the city’s largest neighborhoods. The community saw massive investment including in its housing stock. By taking a drive through the neighborhood, one can see that some of these homes remain standing today.

The decline of the steel industry coupled with effects of suburbanization had a devastating effect on Homewood-Brushton. Additionally, the community suffered from racial tension throughout the 1950’s resulting in Homewood-Brushton becoming increasingly segregated into the 1960’s and 70’s. Homewood-Brushton saw continued disinvestment through this period that led to a crumbling housing stock and an increase in vacant lots, which pose significant environmental concerns due to potential soil contamination.
While the past several decades have been rather bleak for Homewood-Brushton, the future is brighter than ever. Together we can make historic change and a healthy environment for Homewood-Brushton is the first step.

A convenience sampling method was used in this study to select three sampling sites due to Homewood-Brushton being split into three neighborhoods: Homewood North, South and West. The study chose three locations where there is a high rate of activity and communal gathering to better understand human ecology at work in these neighborhoods: Westinghouse High School, Homewood-Brushton YMCA and Homewood Senior Center.

Using these three sites, The Agricultural Analytical Services Laboratory at the Pennsylvania State University was consulted for a Soil Test Report in three neighborhoods of Homewood-Brushton

The potential large scale problems associated with Homewood-Brushton’s dangerous soil quality makes further study and the implementation of solutions an utmost priority that requires the attention of the community and the city’s government as well.

Why is this important?

Long term effects of lead exposure include diminished cognitive function, increased aggression, and eventually heighten the cycle of poverty and make it even harder to break out of. Lead blood levels of greater than 10 micrograms can greatly affect these factors and cause lifelong health consequences. The incredibly high lead soils levels found at three sites in Homewood-Brushton pose a danger to the health of community members and have the potential for high blood lead levels for those who live in the community. Solutions to the lead soil level and exposure issue in Homewood-Brushton must be explored.

This preliminary study requires further attention. A more comprehensive study is paramount to assess soil qualities and how soil contaminants effect Homewood-Brushton in regards to public and environmental health.

Potential Solutions – We can all play a role!

“It is our collective and individual responsibility… to preserve and tend to the world in which we all live.”

It’s clear immediate action must be taken to address poor soil quality in Homewood-Brushton. While many solutions may take time to implement, others can begin right away. Informing the community about the concerns of soil contamination and lead exposure in their community is paramount. Many resources are available to begin an education campaign regarding the hazardous effects of lead and how to limit exposure. These are invaluable tools that anyone can utilize to benefit individual families in Homewood-Brushton.

Furthermore, a comprehensive study must be planned and executed to explore soil quality throughout Homewood-Brushton and other Pittsburgh communities with high vacancy rates. Our city has the higher education resources to uncover environmental issues and create solutions. We encourage students and organizations to use the information we’ve presented to further expand our study and we suggest a collaborative approach future efforts.

Other solutions are present, but may take time to implement due to costs; however, this isn’t an excuse for inaction. The community and concerned Pittsburghers must organize to ensure the city takes the appropriate measures to assist in reducing hazardous soil contaminants in Homewood-Brushton as well as similar neighborhoods with large concentrations of vacant lots.

The URA has control of a large proportion of vacant land in Homewood-Brushton. A suggested plan involves the repurposing of vacant land into green infrastructure. This is a practical solution because the city has until 2036 to come under EPA standards with its flawed sewer system. The City of Pittsburgh has approached this issue with an emphasis on utilizing green infrastructure to reduce the amount of stormwater run-off entering its sewage system. Given Homewood-Brushton’s geographical location, vacancy rate and soil contamination levels, the area provides massive potential and prioritization for green infrastructure construction; however, this must be completed with the the input of the community. This process also offers the potential for community involvement into the future and could possibly lead to job readiness programs and job creation due to land management required for the maintenance of green infrastructures.

Also, check out these programs to help with this cause!

Additionally, we invite everyone to participate by making suggestions in the comment section at the bottom of the page regarding resources, ideas, or plans for the future environmental well-being of Homewood-Brushton. 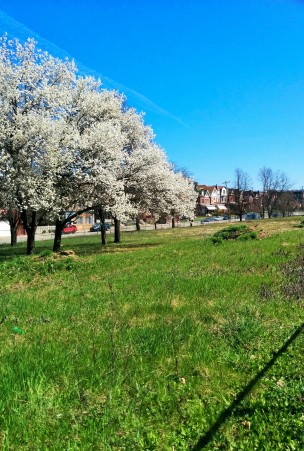